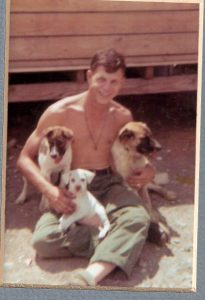 It’s a beautiful Sunday afternoon in May – Mother’s Day, 1968. Spring in the Midwest is sprouting with life and possibility. The peonies are shooting stalks through the rich, black soil in the flower beds. After morning mass at St. Joseph’s, I am sitting in the shade of the big sycamore in Mom’s backyard.

My husband, Howard, has been in Vietnam since March. He thought it would be best for me to stay with my parents while he was gone. Princess, our black German shepherd, is my constant companion. She lies at my feet as I glance through the Sunday paper. I notice wedding announcements, department store sales, ads for restaurants, and upcoming movies.

Nestled in the back pages of a remote section of the paper, I spot an article about a battle in Vietnam. I avoid reading about the war, but this article found me. The action described in the article involves Howard’s unit – 3rd Battalion, 39th Regiment, 9th Infantry Division.

War Refugees Are Flooding into Saigon …The Command Post is in a Buddhist pagoda, 20 yards from a tiny Catholic church which serves as a medical aid station. “They hit us hard all last night with mortars and rockets,” said Maj. Boone. “Two soldiers from Alpha Company held out during a three-hour attack on a little bridge across a feeder canal. I don’t even know their names but they are up for the Silver Star. We’ve been lucky so far – only four killed and 14 wounded in the battalion.”

Howard is dead. I know it. I don’t know how I know, I just know. I can’t breathe. Tears are coming. I’m trembling inside and out. Mom comes out into the yard and asks, “What’s wrong?”

I show her the article and whisper, “Howard is dead.”

The potatoes fry in their usual pool of lard, lard rendered from the hogs my uncles and brothers slaughter every January. Mom stands over the stove, stirring the potatoes and turning the blood sausage frying in an adjacent skillet.

Princess greets me after I return from my job at Scott Air Force Base. My father sits in his favorite chair, watching the evening news and waiting for dinner to be served.

Something draws me to the front windows. An ugly green sedan with the words “U.S. Army” printed on the side of the door is parked in front of the house. Two men in uniform sit inside the car, looking down at the paperwork on their laps.

The room starts spinning, my hearing becomes muffled, reality is slipping away from me. Princess barks as Mom walks to the front window to see what’s causing the commotion.
They’re coming to tell me he is dead.

“Please God, let him be wounded, not dead,” I say.

The men continue to sit in the car. Hours seem to pass before they get out, straighten their uniforms, and head toward my door. I put Princess in the basement – she doesn’t welcome strangers. I come back to open the door and see two men standing before me with the same terror in their eyes that I’m feeling inside of me.

“Good evening,” they say, as they remove their hats. “We’re looking for Pauline Querry.”
“That’s me.”

They look at my protruding abdomen which holds my unborn child, and then look at each other in silence that lingers too long.

“Was he wounded or killed? How bad is it?”

“We regret to inform you that your husband, Sergeant Howard E. Querry, was fatally wounded on the afternoon of May 10 by a penetrating missile wound to his right shoulder.”
I’m dizzy. I can’t think straight.

They don’t answer me. They just reread their script as if practicing their lines for a performance they’ll give someday.

“We regret to inform you…”

The room is spinning. I can’t think, I can’t hear anything. I’m going to faint. Alone…I must be alone to sort this out. Leave me alone.

Instead, I sit politely as they inform me of the details…funeral… remains… escort… military cemetery… medals.

Finally they gather their papers and leave. I politely show them to the door. My parents are hysterical. My dad weeps, my mom trembles. No sound is coming out – her whole body is shaking in upheaval.

After retrieving my dog, I stagger to my room and shut the door. I throw myself on the bed, gasping for air. My heart races and pounds. My unborn baby starts kicking and squirming. I hold my dog with one hand, my baby with the other, and I sob. I’m shattered, blown to pieces. It can’t be true.

No medics come, no helicopters fly me away to an emergency room. I struggle to save myself but I cannot. I die.

Half an hour later, a ghost of my former self gets up off the bed and begins planning Howard’s funeral.